Omanyala is set to be announced Thursday, January 20 as AHF’s African Ambassador for the Vaccinate Our World (VOW) campaign.

Africa’s fastest man will be used as a spokesperson to champion vaccination across the continent, which consistently ranks lower than other regions.

“The eighth fastest man of all time in the 100 meters will have to use his voice and his influence to encourage as many people as possible across Africa to get vaccinated against COVID-19.

“Africa is much weaker than other parts of the world, due to the initial lack of vaccine supply due to hoarding by rich countries and the reluctance of significant numbers of people to get vaccinated” , we read in part in the statement of the AHF. .

Based in Los Angels, AHF is a global nonprofit organization that provides cutting-edge medicine and advocacy to more than 1,000,000 people in 43 countries.

An initiative of the American medical society, VOW is a digital advocacy campaign to urge world leaders to ensure vaccine equity around the world.

The appointment comes just a month after the breakthrough athlete landed another lucrative job.

On December 3, 2021, Omanyala joined the elite reconnaissance team of the General Service Unit (GSU). The sprinter joined the team on undisclosed special terms.

Omanyala would take on a new role that would see him represent the National Police Service and the country at future track events. 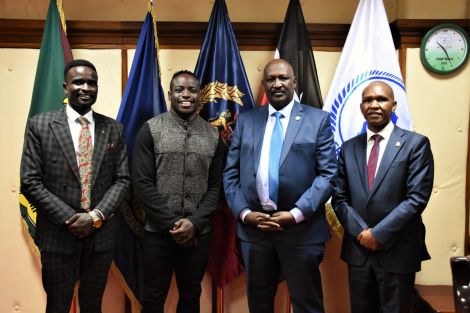