This organization aims to provide capital to black farmers

When farm activists Olivia Watkins and Karen Washington met at a conference in 2017, they acknowledged there was no program for black farmers that met their economic needs. So they decided to fill the void.

“Farmers have one chance in a season to do it right. There were great organizations educating black farmers, but there was no organization pooling capital and giving it through a grant or loan to black people to fill the gap in racial wealth,” says Watkins. “There is no incentive for black farmers to feed black communities.”

While most people know that enslaved Africans were brought to America in order to do the hard work of nation building, perhaps less is known that not only their physical labor was desired, but also their agricultural knowledge and their ability to cultivate the land. After the Civil War, African Americans continued to farm either as sharecroppers or by owning the land they farmed – 100 years ago they made up 14% of the country’s farmers. Today, black farmers make up just 1.4% of the industry.

While there are a variety of factors behind this decline, the main causes are systemic government racism and lack of access to finance.

Shortly after meeting, Watkins and Washington launched the Black Farmer Fund, which welcomed its first cohort of beneficiaries this year. The fund provides capital and resources such as business coaching to black farmers. The organization aims to build community power and wealth, while working to change and change the way food justice happens.

This is important work because, according to Watkins, the average income for an American farmer is $42,000 per year, while the average income for a black farmer is -906 dollars per year. The economic disparity creates bigger problems than just the lack of black farmers. “That’s why there’s food apartheid in some communities,” says Watkins. “That’s why we’re so disconnected from our food, because our communities don’t produce food, and those that produce are struggling.”

The Black Farmer Fund has been especially important during the pandemic, when black farmers have been hit hard economically. Watkins saw the need to create an emergency relief fund where farmers could quickly access capital. So they launched a special grant to pay off personal or business debts, help cover labor costs, or buy equipment and infrastructure such as greenhouses. “Farming is a difficult experience. There were a lot of emergencies in our community and we didn’t want people to dip into their investment capital,” says Watkins. Additionally, a rapid response fund for farmers who were not in the fund’s portfolio was created to distribute funding more widely. 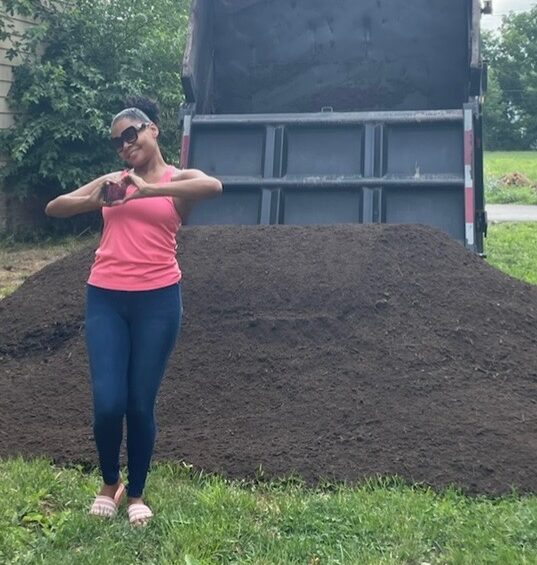 The level of thought and dedication is part of what attracted farmer Denise Scott of 716CBD and Black House Growers to the Black Farmer Fund. As part of the first cohort of grantees that includes farmers, herbalists and collectives from across New York State, Scott likened the Black Farmer Fund staff to feeling like family. “When you start meeting people behind the scenes, you start building a family with them… Some of those people stayed with me,” she says. “We grew up there as a family.”

Located on the New York side of Niagara Falls, Scott’s 716CBD is a holistic healing space where she makes and sells butters, tinctures, salts and scrubs. His micro-farm, black house producers, occupies only a tenth of an acre, and every inch is covered with mint, chamomile, tomatoes, cabbage, celery, cucumber, peppers, kale and cabbage. She also plans to add flowers and sweet potatoes. Ultimately, Scott wants to own 100 acres and donate part of it to the Black Farmer Fund. “It always comes back to earth,” says Scott. “When you start talking about farm-to-table, it’s your own sustenance.”

Scott also has historical family ties to agriculture. Her father was a farmer in North Carolina, and as she began to learn more and more about food justice and shortages, she knew she had to start farming herself. “I started looking at survivable black people and how we could survive before that. All the mothers had a garden in the yard,” she says. “I went back to what my ancestors did for centuries.”

The first cohort of the Black Farmer Fund also includes: Black Yard Farm Collective, a collective of black farmers who create a space for the community to learn about agriculture; Trinity Farms, a small orchard in Clintondale, New York; and Caribbean Farm Fresh Growers, which produces Caribbean products that are hard to find in New York. In total, the organization has funded eight farms, and the growing demand for agricultural education in local communities and expanding agricultural space for black farmers underscores that there is still work to be done.

Even with all the obstacles black farmers face, there is still a lot of hope. “Black farmers are incredibly resilient, gifted and talented people,” says Watkins. “There is this ancestral line of being agricultural experts and supporting communities.”